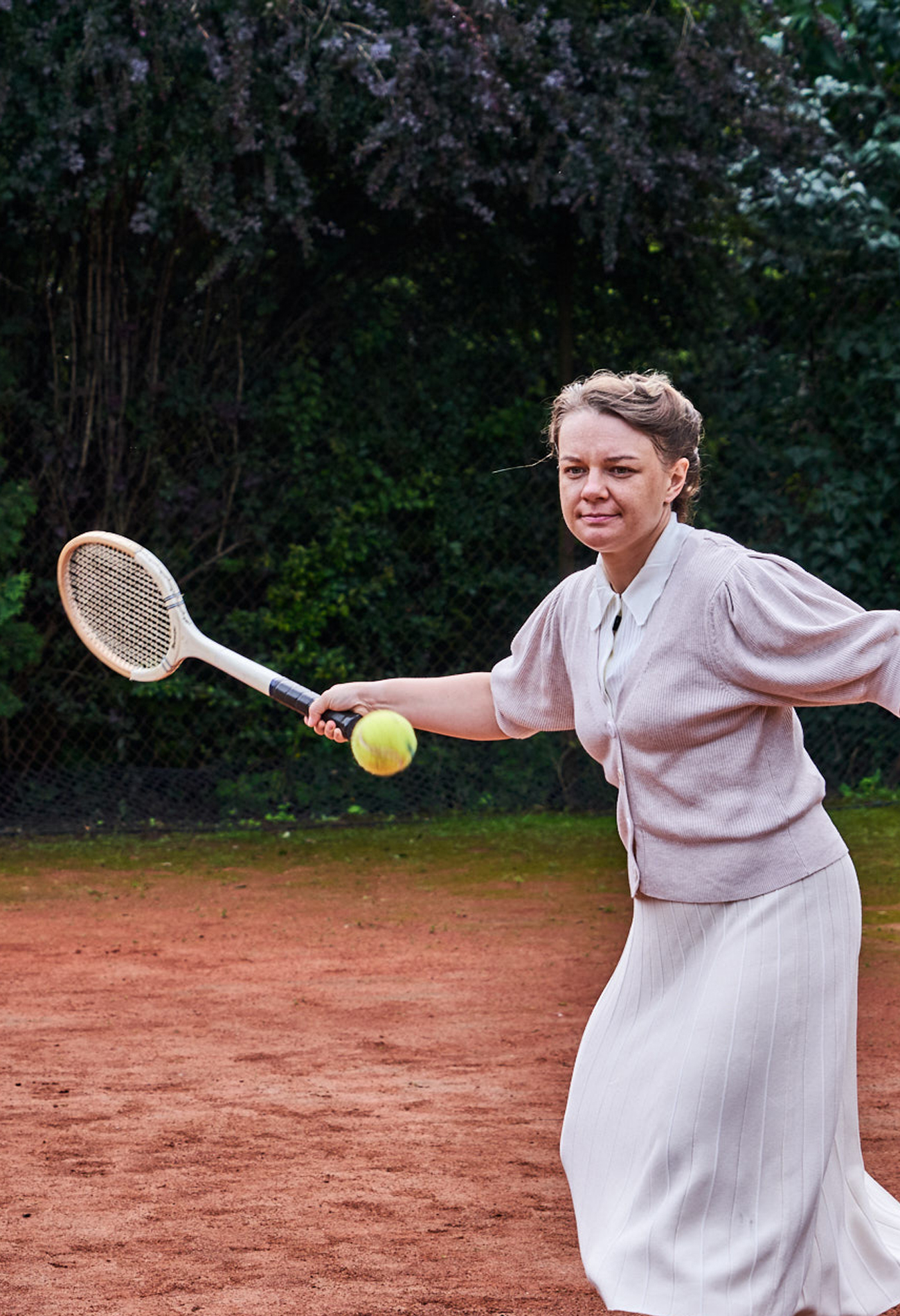 ON THE TENNIS COURTS OF INTERWAR WARSAW

Jadwiga Jędrzejowska, popularly called 'Dża-Dża’ in the press (the foreign press, unable to pronounce her name and surname, called her „Ja-Ja” after her initials), was an uncommon character. Charming, resolute, determined – a woman who knew how to stand her ground. An interwar tennis player, performing on the courts of Warsaw and European capitals, she won the favor of fans with her smile and personal charm. The fascinating character has become the heroine of the latest VR production.

The plot of the film begins in a ruined building, in the 1980s. A mysterious collector Fabian (Marek Kossakowski) places an unusual order to the „man of everything”. He is to find a certain tennis racket. The collector years ago was an officer in the German army, and together with him the viewer travels back in time to the 1940s, to occupied Warsaw, to learn the fate of the object of the commission. In one of the eateries at the time, fate entangled the paths of Fabian with the inconspicuous waitress Jadzia (Olga Żmuda). The officer, a tennis fan, recognized in her the famous pre-war tennis player Jadwiga Jędrzejowska, who conquered the courts and the hearts of spectators at Roland Garros or Wimbledon. He made her an offer to play an unusual match, on which might depend the freedom and life of Jadwiga.  The fate of the extraordinary match is waiting to be discovered in the VR film!

JADWIGA JĘDRZEJOWSKA – FIRST ROCKET OF THE SECOND REPUBLIC OF POLAND

Jadwiga Jędrzejowska was born in 1912 in Cracow, right next to the AZS courts. Little Jadzia tried to help patch the household budget by serving balls to players on the nearby tennis courts. This is how the girl’s fascination with sports was born. The first racket was forged for her by her father. A few years later Miss Jadwiga, the daughter of an ordinary worker, stepped on the court. At first she played mainly with men, as other female players still considered tennis a game for the upper classes – this did not stop her. At the age of fifteen, she won her first national title. After that it only got better – in almost forty years she won the national championship title a total of 62 times, in singles, doubles and mixed doubles. Interestingly, she played amateur (in Legia), working in Dunlop’s representative office during the day and training on the courts in Warsaw in the evenings.

Hard work was followed by international success. In 1931, she played at Wimbledon for the first time. She continued to make progress – a few years later she reached the final of this prestigious tournament. She fought a remarkable tennis duel with Dorothy Round, and although she lost, she returned to Poland as a true heroine. She also charmed on the courts of Roland Garros, winning the Grand Slam title paired with Simonne Mathieu in 1939. The public always loved the smiling Jadwiga, who played with a second ball in hand and had a peculiar backhand.

Ja-Ja was an extraordinary woman – she was friends with Charlie Chaplin and played with King Gustav V of Sweden, who wanted to help her leave Poland during World War II. However, Jadwiga did not accept this help, and earned her living by working in a pub. After the war ended, she continued to play until the 1960s, still winning titles in Poland. Jadwiga Jedrzejowska died in 1980.